Rather than being a standalone programming language, Halide is embedded in C++. This means you write C++ code that builds an in-memory representation of a Halide pipeline using Halide’s C++ API. You can then compile this representation to an object file, or JIT-compile it and run it in the same process. You can read more about it at halide-lang.org.

Halide is used very often in Google, for example in the famous HDR+ algorithm that powers the camera app on the flagship Pixel devices. Beyond that, Halide pipelines are run at scale within Google Photos, Youtube and elsewhere [3]. 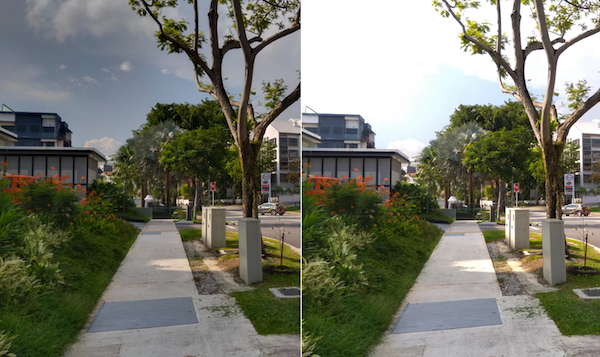 I work on Camera from Google at Google and we use Halide language extensively for implementing our features like HDR or Night Mode. Migrating to Halide from Open CV helped us significantly improve performance of some of these algorithms on the arm chipsets that power most of Android devices.

Important Disclaimer: Any opinion called out in this article are my own and don’t reflect opinion or stance of the organizations I work with.

Need: Why should I care about yet another programming language?

Modern hardware has become significantly powerful over time. But, so has the scale of the problem statements we are dealing with.

Let’s take the example of computational photography algorithms. These days mobile devices have fairly large image sensors. Certain Android devices are now shipping with as large as 108 Mega Pixels cameras. Even at a smaller resolution like 13MP, an image has ~13,000,000 pixels. If we have to run a simple brightening operation like

We have to run this function for ~13 million pixels.

But, its good for us that - the CPUs that we are dealing with, are neither single core nor scalar. So we can often take advantages of multiple cores and support for vector instructions in the modern CPUs to improve the runtime latency of these algorithms by multiple order. 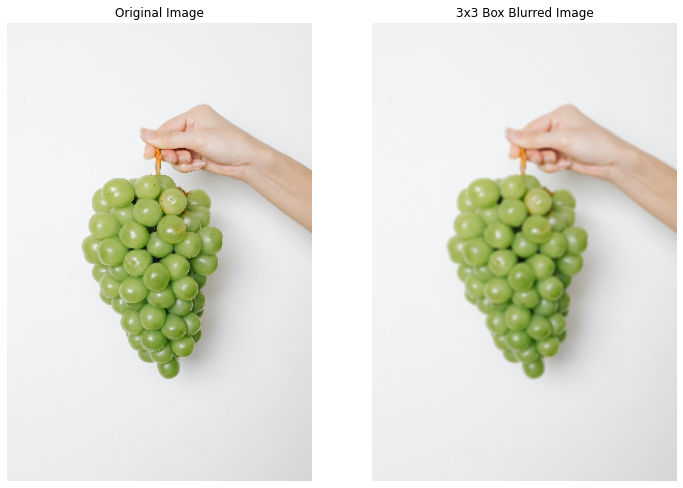 You can blur an image by convolving it with a 3x3 box filter. For each pixel at position (x, y) you replace it with the average of all pixels in it’s immediate neighborhood.

The brute-force approach would be to do it for every pixel, thus getting a time complexity of O(K^2 * WH) for K being the kernel size (= 3 here) and W and H being width and height of the image respectively.

And one improvement over this is to leverage separability of kernel. We can decompose the single 3x3 kernel into two 1x3 and 3x1 kernels.

This way we split the single step into row and column interations reducing the complexity to O((K + K)WH). For K=3 that alone should be ~50% optimisation.

Per [3], the authors benchmarked this on Intel Core i7-4790 CPU and found the average latency to be around 6.5ms/MP.

Everything is fine so far. However, to achieve superior performance and take the full advantage of modern CPU - we need to leverage vectorization, multi threading, tiling and fusion. Doing so helped authors achieve 20x faster performance on the same x86 CPU.

This approach reduces the average latency to 0.30ms/MP which is like 20x faster.

This is very significant performance boost, but it comes with certain caveats:

So the need was to have a way to achieve high performance while retaining portability, simplicity and maintainability of the code.

What does Halide lang offer

Halide enables us to write simpler high performance code by separating the algorithm of an image processing pipeline from how to efficiently run it on a certain machine. As programmers, we still need to define how the algorithm should be executed - but defining these strategies much easier to write, test and maintain.

This separation also makes it much easier to separately maintain the algorithm and schedule. It makes it much faster to try out different schedules which otherwise requires complex loop structure changes.

The same 3x3 box blur in Halide is written as

The above code seemed to have an average latency of 0.29ms/MP on the target hardware (same as above).

The schedule above tells the compiler to generate tiled loops, generate vector instructions and paralellise the loop in row order. Usually as we start exploiting parallelism, memory bandwidth starts to become the bottleneck. If you decide to do a full horizontal pass before computing the blur vertically - it doubles the storage and memory bandwidth requirements. These are usually addressed by breaking down the 2D loops to tiles of carefully selected size and then fusing the loops.

Halide code makes it much easier to do so. From engineering perspective this significantly reduces the boilerplate code that needs to be written to achieve the same.

It’s thus fair to conclude that - Halide language allows us to write fast and maintainable code.

Even an expert takes time to come up with fast code - Halide makes it much easier to explore the choice space for different approaches.

Shout out to the development team

A huge shout out to the Jonathan Ragan-Kelly and team for coming up with Halide and making it open source. Much of the content in this article is derived from their work published on - Halide: decoupling algorithms from schedules for high-performance image processing. I have been very fortunate for getting change to work with some of the authors and involved members.

This article is part of a multi part series. In the next article I’ll be talking about the general concepts in Halide code. 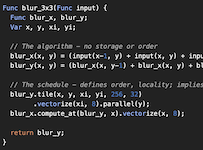